Warning: culture war, snarkiness, less charitable than a Make-a-Wish Foundation fundraiser. If you don’t care about the hateful things outgroups do, enjoy this hedgehog and come back next week.

Ezra Klein’s latest essay on the YouTube right / Intellectual Dark Web is perhaps the voxiest Vox article ever. The Vox specialty is walking 90% of the way towards truth in careful, reasoned steps, and then taking a left turn off a steep cliff.

Klein’s article responds to a challenge by Dave Rubin, wondering how he (Rubin) suddenly became a conservative reactionary:

Klein claims that Dave Rubin is part of some group, and they both agree that it’s a bad group to be part of. The question is: who is Dave Rubin in a group with? And what makes them part of the same group?

You could ask Dave Rubin which groups he identifies with, and he’ll name examples like liberals, gays, Jews, and the Intellectual Dark Web. But Klein notes that even the IDW will “draw a circle around the most respectable subgroup of this world, use their preferred term for themselves, and worry over the unsavory characters they were associating with”. If you trust Rubin to define his own groups, there will be suspiciously few Nazis in them.

Another way to identify this group is via a network graph, a network whose nodes are people Ezra Klein is suspicious of and whose edges are podcast appearances and YouTube interviews. Lucky for Klein, Rebecca Lewis of the Data & Society research institute created a chart of this network using an algorithm, and we all know that algorithms are objective and trustworthy. 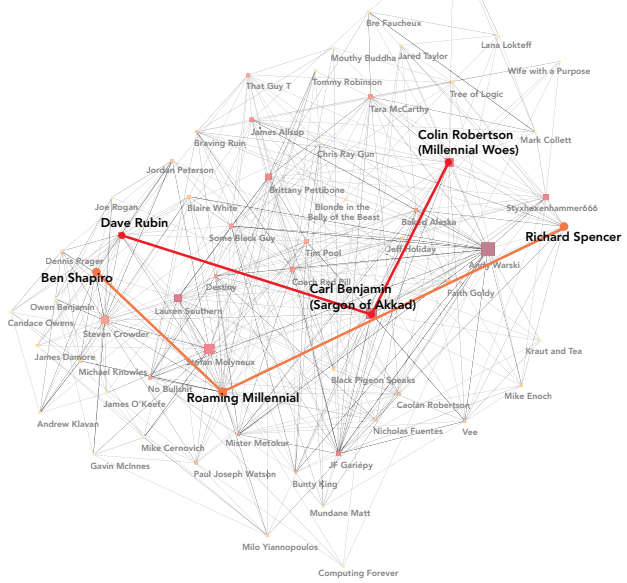 (Of course, after the algorithm had run they still had to manually remove all the inconvenient data points, like Noam Chomsky appearing on Stefan Molyneux’ show).

Here’s how it works: Nazis have a Nazi number of 0. If you interact with someone whose Nazi number is k, your number is at most k+1. I interviewed Geoffrey Miller, who did an event with Sam Harris, who recorded a podcast with Ezra Klein, who interviewed W. Kamau Bell, who interviewed Richard Spencer, who’s a known Nazi. So my Nazi number is 5, and yours is at most 6 by virtue of reading Putanumonit. Congratulations! You are within 6 degrees of separation from a Nazi, and so you’re practically one yourself.

Klein noticed that his own Nazi number is an unflattering 2, and reminds us that “it’s worth being careful with these diagrams”. He then immediately disregards his own warning and claims that Rubin is fair game for the chart because:

Get it? My link to Klein’s article is “intentionally cross-pollinating audiences” to Vox, and so it turns out that I’m a social justice ally and not a Nazi after all. Whew, I was really worried there for a minute.

Agree not to Disagree

What defines this group besides the number of lines you can draw on a chart? Klein comes up with an important insight:

Ideological coalitions depend on the agreements you emphasize and the disagreements you live with. Sen. Elizabeth Warren supports single-payer health care and Sen. Mark Warner doesn’t, but they’re still both Democrats. If Warner were anti-abortion, had signed Grover Norquist’s tax pledge, and had endorsed Donald Trump, he’d be out of the party. When you’re trying to understand an ideological coalition, you’re looking for those lines.

The ideology that Dave Rubin and his friends can’t agree to disagree on is what defines them as a group. According to Klein, this ideology is reaction, or antagonism to the progressive project :

Their reactionary politics and connections to traditional modes of power show that what they are most often fighting for is actually the status quo—a return to traditional gender and racial norms, or a belief in the individual over an understanding of group oppression.

What is the right-wing status quo that Rubin and the rest of the “reactionary right” are defending? It’s a world of legalized drugs, reformed prisons, gay rights, and abortion access. Klein explicitly excludes all of the above from the pursuit of social justice, and doubles down on “a return to traditional gender and racial norms”, even though all four of Rubin’s stated political stances have to do with race and gender.

Since it’s hard to catch Rubin himself saying anything problematic about women and racial minorities, Klein posts clips of Milo Yiannopolous and Jordan Peterson, two Rubin guests, hating on feminism. The clips intend to show that hating on feminism is one thing the “reactionary right” agrees not to disagree on. What do the self-styled IDWs have to say in their defense?

The person who first styled himself IDW is Eric Weinstein, a five-time guest on the Rubin Report. Here’s what Eric had this to say on a show with “reactionary right” superstar Joe Rogan:

I don’t think that Weinstein, husband to a successful Indian woman, will find much agreement with Jordan Peterson on any of those. And yet, the two have appeared on stage together multiple times. So what do the two of them, and everyone else in the group, have in common? I can think of two things:

I already expressed my wish, on the most IDW-aligned magazine, that they focus more on free speech and bold ideas and less on booing the outgroup. I explicitly identified Vox and Ezra Klein as symbols of the outgroup.

Klein also couldn’t help notice that a lot of people kinda hate Vox, ranging from the “reactionary right” to leftist podcasters Chapo Trap House. But while Chapo are probably just allies joining the good fight with a few misguided assumptions, the fact that the right “can’t be in sympathy with the SJWs” means that they’re against race and gender equality.

And this is where Klein falls off a cliff – thinking that hating a certain tribe means that you oppose the stated goals of their ideology, even when the two have very little to do with each other.

In The Ideology is not the Movement, Scott Alexander lays out the following model of how tribes form:

In Scott’s main example, he claims that it’s not very useful to understand “Shia Muslims” in 2018 as “the people who believe that Ali ibn Abi Talib was appointed the rightful Caliph by Muhammad at Ghadir Khumm”. Shia are the people who do Shia stuff, who date other Shias, and who outgroup Sunnis. Very few of them devote any mindspace at all to debating the Caliphate ascension.

Tribes drift away from the flags they originally rallied around, especially political tribes since politics is about tribes. Imagine any of the political leaders from 50 years ago trying to fit in with the modern incarnations of their movements. And if people spend so little time pondering the central ideas of their own tribe, how much less effort do they spend on the ideology of their outgroup?

The great mind of Brian Caplan coined the concept of the Ideological Turing Test – being able to represent your outgroup’s ideology so faithfully that they could think you are one of them. Passing the ITT is galaxy mind level: it is hard, it is rare, and a lot of people aren’t even aware that it’s a thing.

The unbridgeable divides today, the ones that seem to define which side you’re really on, revolve around issues of race, gender, identity, and equality.

Klein not only is incapable of passing the IDW’s Ideological Turing Test, but he also seems unaware of the fact that someone can fail to pass his own. The only way I can imagine this happening is that Klein is so absorbed in his ideology that he can’t fathom other minds being different.

(I guess I can imagine another option: Klein is knowingly lying for what he thinks is a worthy cause. )

As for the IDW: some of them are fighting for progress on gender and race equality but disagree with Klein on the way to get there (e.g., the Weinsteins), some are in fact opposed to the progressive fight (e.g., Ben Shapiro), and some do their best to ignore this entire topic and focus on other things (e.g., Sam Harris). Very few of them I think would get a high score on a Social Justice ITT, and neither would I. On the topic of whatever “post-modern cultural neo-Marxism” is, I’m more inclined to trust a transgender YouTuber in a wig than Jordan Peterson, who uses it as a catch-all term for his outgroup.

Quick segue away from Hitler. I was at a party on Saturday, and a man was introduced to me as: “a really smart person who hates Rationality”. And yes, this is a humblebrag – I’m very proud of having cultivated a reputation such that friends will introduce me to someone who deplores my ingroup and expect a fun and curious conversation.

What did this gentleman hate about Rationality? He couldn’t stand the insufferable arrogance of Eliezer, who in his opinion isn’t only wrong on quantum theory but has the gall to denigrate physicists for disagreeing with him. Also, a rationalist was being a dick to him at Burning Man once and wasn’t condemned quickly enough by other rationalists around them.

I tried to push for disagreements on core issues, and those turned out to be either minor quibbles or misunderstandings. For example, he thought that LessWrong espouses a strict and wrong definition of “intelligence” (most of us don’t). He said we’re unaware of the tortured history of “rationality projects” (some of us are). We don’t even disagree much on the individuals: I agree that Eliezer is arrogant (which doesn’t change the fact that he’s usually right), and I agree that the other rationalist is a dick (although I see our community’s tolerance of weirdos as a positive, not a negative).

There are whole online communities dedicated to detesting rationalists, but they’re not doing it because they think sunk cost bias doesn’t exist or that Bayes’ Theorem is wrong or even that Scott’s model of tribe formation is misguided. They’re certainly not doing it because they hate “clear thinking and true beliefs”. I hang out in those spaces occasionally for the perverse pleasure it gives me, and most people are there because they met or read a few rationalists and had a strong personal aversion to them.

If you enjoyed reading this essay because Ezra Klein is your outgroup, make sure not to make the same mistake he does. I dislike Vox because what they do has the effect of suppressing individual expression of ideas in favor of anti-cooperative narratives. But I don’t think that Klein wakes up in the morning thinking: How can I best empower Moloch and promote intergroup conflict by suppressing the exchange of ideas outside of gated institutions? Not because he’s on my side in the fight against Moloch, but because he doesn’t even know what this framework means.

But that means he’s also not diametrically opposed to everything I believe in. This is heartening because it leaves room for cooperation and agreement; we are not merely fighting in a zero-sum game. But cooperation requires learning to speak the same language and passing each other’s Ideological Turing Test, and that is not easy to do.

16 thoughts on “What the Haters Hate”