Hello all. This is Jacob’s wife, and while Jacob is off chilling in the fjords, I’m staying home and have volunteered to write a guest post.

Instead of trying to match the usual Putanumonit fare, I chose to write about something I find very exciting. I’m a biologist, and while I normally work on research involving the sense of touch in tiny roundworms, I love to read about interesting animal biology that I come across through pop-sci media. Yes, I am one of those people you might find spouting “weird animal sex facts” at parties. But seriously, the diversity of life out there is incredible, and I really can’t get enough of learning and thinking about it. So here’s a bit about a creature that’s been capturing my fascination recently.

Consider the octopus. But first, you might want to consider considering the octopus. Why consider the octopus? I think they’re incredibly interesting creatures, and upon reflecting I think that’s probably because I’m so confused by them. They wouldn’t be very interesting to me if everything I knew about them fit well into my world view without jostling the content or structure of surrounding information, even if I had reached the point of knowing enough to know how much I didn’t know. Working in research, I’ve been whacked upon the head several times with the fact that just because information isn’t known or a problem isn’t solved, that doesn’t automatically mean that anyone cares about learning the information or solving the problem.

That goes for myself as well: I don’t know how many teeth the average walrus has, but until now it’s never occurred to me to look it up because it really doesn’t make much of a difference to me whether it’s 26 or 32. Once I started thinking about it, I had to Google the answer (it’s 18), but I’m happy to stop there instead of asking the same question about every other toothed animal I can think to name. It’s slightly more interesting for me to consider what walruses use their tusks for (Google says mostly for gripping the ice to haul themselves out of the water), but why should that question be more interesting? Walrus tusks are weird, and weirdness contributes to interestingness.

Whaaaat is going on?

For me, having the initial question answered actually spawns more questions. If tusks are so useful for pulling oneself up onto the ice, why are there seals without tusks? Now I’ve added confusion on top of the weirdness, and I’m even more interested. The same thing happened to me regarding octopuses.

Exhibit A: Octopuses are weird.

Octopuses and other cephalopods (the clade including octopuses, squid, and cuttlefish) can change the color of their skin by expanding and contracting pigment-filled bags to show or conceal their contents. Changes in colors and patterns are associated with certain behaviors, like hunting, resting, or defensive maneuvering. Octopuses can also change the texture of their skin by extending projections called papillae, which go from being small bumps to tall spikes. Feel free to spend a few minutes watching this in action on YouTube. 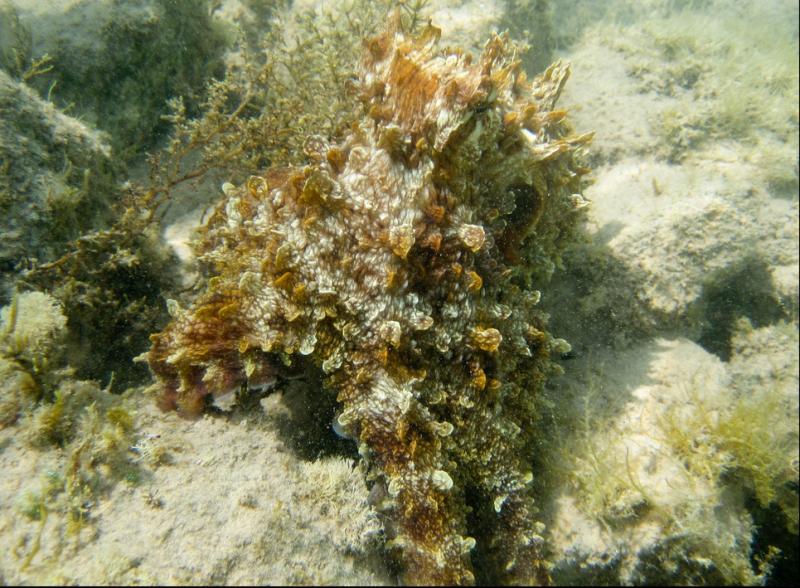 Nothing but a bit of coral here

Another particularly strange facet of these creatures: octopuses have an unusually complex system for RNA editing, so that the same stretch of DNA can give rise to a large diversity of RNA codes (basic bio review: DNA is transcribed into RNA which is translated into proteins). In most animals, evolution is thought to occur mostly through changes to DNA, but cephalopod evolution and adaptation appears to have occurred mostly through RNA editing, with their DNA genomes changing relatively little over millennia.

Exhibit B: Octopuses are confusing.

Octopuses appear to be very intelligent. They get up to all sorts of shenanigans in captivity, like escaping their tanks, disassembling plumbing, or purposefully messing with electrical equipment for their own amusement. They’ve also been trained to solve puzzles and mazes, and seem to be able to recognize individual humans. However, they lack a lot of characteristics that we usually associate with intelligent animals: they aren’t social, they aren’t long-lived, and they don’t engage in post-hatching parental care.

Some intelligent animal species have something akin to culture, where certain adaptive behaviors must be taught. Cetacean (whale and dolphin) hunting techniques are one example of this, and since octopuses are known to use complex hunting strategies it would make sense for them to use their intelligence for intergenerational information exchange. But octopus parental care only happens up until egg-hatching, whereupon the octopus mom will go slink off and die instead of teaching her babies anything.

Despite the adage of sperm being cheap and eggs being expensive, even male octopuses will often die after reproducing once. Some go to lengths to avoid being cannibalized by their mate, like detaching their mating arm (which is effectively like a penis for them) and leaving it stuck inside the female.

But without their penises it’s not as if they’re escaping with their lives in order to mate again (although some species have been found to have more than one mating arm). Instead they go off to become senile and die from their own carelessness within a few weeks. Usually that means being eaten by some other predator, so it would actually make more sense in my mind for those male octopuses to allow their mate to eat them, providing her with energy to take care of the fertilized eggs instead of just giving up their bodies to whatever random carnivore. Males have been observed mating with multiple female octopuses, but only for a relatively short period of time before they wander off and die alone.

While female octopuses do spend a lot of time and energy taking care of their fertilized eggs and will stop hunting while doing so, it still doesn’t seem that their deaths are absolutely energetically necessary. Female octopuses in captivity have been observed self-mutilating in apparent effort to hasten their own deaths after mating, smashing themselves into walls and eating off the tips of their own tentacles. Also, it seems that if a certain part of the octopus brain (called the optic gland) is removed, the females won’t engage in this behavior and instead go on to live, eat, and even mate again after reproducing. The optic gland was also found to release hormone-like signals that initiate programmed cell death elsewhere in the octopus’s body. With this being the case it seems that something more than malnourishment causes the female octopus to die after reproduction.

It’s important to note that these experiments were done on octopuses living in captivity, so perhaps a wild female octopus would have little chance of survival after spending so much energy taking care of her eggs, but if that were really the case, why would the animals need to have a self-destruct program installed?

All this points to orphaned octopus babies having an advantage over those with living parents, which is easy enough to fathom. Without mom and dad around, the kids are left with more food and territory for themselves. However I’m still confused. Wouldn’t a given gene be more likely to replicate itself residing in an individual that reproduced multiple times in addition to being in half the octopus babies it helped produce?

Here’s a try at coming up with a possible explanation: maybe octopuses are like single-use consumer products, think plastic forks. Plastic forks are so cheap that people are willing to buy them, eat with them once, toss them in the trash, and then buy new plastic forks for the next picnic that comes around. In order to reuse the forks, you’d have to wash them, which takes effort, but they can also be flimsy enough that you might already have a few bent prongs after a single round of use.

I don’t think I’d describe octopuses as particularly “cheap” though: while a single brood contains thousands of eggs, the female spends months guarding and cleaning the unhatched eggs without leaving to hunt and eat. After that, the offspring take months or even years to reach sexual maturity, and on average, you’d only expect two individuals from a brood to make it that far and successfully reproduce (assuming a stable population size). To continue with the fork analogy, it could be that they’re annoying to wash, here meaning that it’s difficult for them to make the transition from mating mode to growth and maintenance mode. Seeing as how the octopuses with their optic glands removed seemed to do okay at that, I’m not so sure, but again those octopuses were presumably being kept safe and fed with minimal effort on their part.

Is it that octopuses are flimsy like plastic fork prongs? Well, you’ve got the males that detach their mating arms to keep from being eaten, and generally they really can’t mate again after that (but again I’m super confused about why they bother trying to avoid being cannibalized if they don’t mate again afterwards). And you’ve got the females that are malnourished and weak after taking care of their eggs for months without hunting (but again I’m super confused as to why the self-destruct mode is necessary if they’re so likely to die right afterwards). So “flimsy” seems to fit but in a way that doesn’t make a lot of sense.

There is at least one octopus species that doesn’t tend to die after reproducing for the first time, called the Larger Pacific Striped Octopus (let’s just say LPSO). After reaching sexual maturity, LPSO females will brood for up to 8 months, repeatedly mating and spawning new eggs. The species’ unusual behavior life history was first recorded in the 1970s, but was rejected for publication because it seemed way too strange (in the sense of being so different from other octopuses) and reviewing scientists didn’t trust the observations. After that it took about 30 years for the observations to be confirmed and published.

What I consider to be the most striking difference about LPSOs is that they seem to be much more social than other octopus species. Instead of living solitary lives as almost all other octopuses do, they’ve been found living in large groups and sharing dens and hunting grounds. It seems like they’re capable of recognizing individuals among their species, and from what I could find they haven’t been observed cannibalizing each other. Perhaps most octopus parents have to die simply because they’re way too likely to eat their own offspring?

I think the biggest obstacle preventing us from understanding octopuses is that they’re hard for us to observe. We can capture them and raise them in captivity, but that doesn’t tell us much about how they’re adapted to the ecosystem they live in. We can stick video cameras underwater and make graduate students take careful notes on any octopus that swims by, but that only works for species that live in shallow water where light can get through. How to effectively study octopuses will prove to be quite the puzzle, but I’m looking forward to additional insights.

I hope you’re very confused about octopuses at this point, and I hope you’re happy about it. Science occurs in areas where believing you understand what’s going on tends to mean you’re deluding yourself, and NOT UNDERSTANDING has to be a default state that can sometimes be chipped into bits of UNDERSTANDING A LITTLE. But you know you might be in for a really good time when you come across a chunk of I AM SO CONFUSED BY THIS SEEMINGLY CONTRADICTORY INFORMATION, because that’s where you might find an interesting story that other people will care to hear.