A couple weeks ago I discovered EconTalk and started devouring their archives. Blame that if my post veers into econospeak.

I studied for my undergraduate degree while living in a big dormitory with 50 friends my age. Since I’ve come to the US, I found out about some things that Americans do in their college dorms:

Since I didn’t live in the US at the time, here are some of the things I was doing while living in the dorm:

Except for the rifles, it was a pretty different experience. On the other hand, our education was absolutely free as long as we stayed on top of the chores. Our class of 50 faced the problem of assigning volunteers for all those crappy chores we had to do. If we just left it for people to freely volunteer, we would either face a situation where nothing got done or where most people would free-ride on the labor of their conscientious friends. We also didn’t want to force people into chores they hate.

Finally, even when I was really motivated to contribute, here’s what I saw when I steeped up to write my name on the chore table:

This is a problem: doing chores is a bummer. In fact, so is doing any kind of work. This leads us to ask: why do people do any work at all?

It is not from the benevolence of the butcher, the brewer, or the baker that we expect our dinner, but from their regard to their own interest. – Adam Smith

The basic law upon which the science of economics is built is that people respond to incentives, and that’s it. What if everyone in our class was paid for doing the chores? Unfortunately, our budget for chore compensation was $0. There was no way we could use “real money” in the system.

This brings us to one of the cooler ideas in the history of economics: money doesn’t need to be “real” to be real currency. Money isn’t a tangible thing, it’s a story. Money is a mutual promise by a group of people to do things (like butcher meat or brew beer) for each other. Currency is the way to keep track of these promises. A $10 note is a promise by every person in the United States to do 10 dollars worth of stuff for you (like making you a sandwich) in exchange for your $10 note that they can then use to get something else. It is backed by the promise of the United States government to allow you to pay your taxes in dollars, and the threat of the same government to put you in jail if your taxes aren’t paid.

That’s not different from my friends promising to clean the toilets if I carry the food boxes. The US Dollar system works because people believe that the promises to exchange stuff for dollars will be kept in the future, any group of people who trust each other can establish their own currency and it will be just as effective.

This is exactly what we did. The smartest person in our group went up to the table of chores and added a column:

The bummer point economy had a few simple rules: 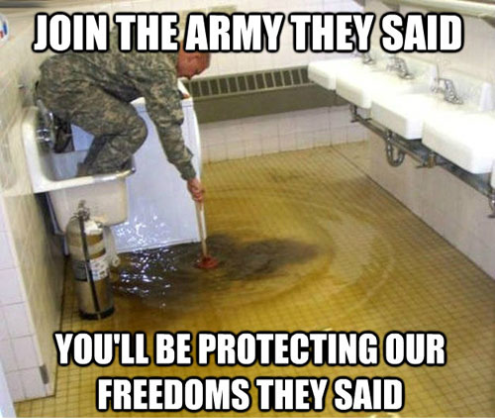 The bummer economy worked amazingly well. The relative popularity of different chores allowed us to quickly establish effecting pricing: the correct number of bummer points that got exactly one or two volunteers for each task. Like with actual dollars, a few guys engaged in an altruistic penis-measuring contest to conquer the top of the bummer point table. They ended up doing about 50% more chores than anyone else and had fun doing it, to everyone’s delight. No one ever had to be forced into a task: whoever was close to the bottom of the table got their pick of the chores each week. People who knew they had a busy period coming up (like exams) could front-load their work and get a bummer buffer.

The biggest benefit was that the bummer trade allowed us to leverage comparative advantage: people volunteered for the chores they enjoyed doing the most relative to the BP price. A free-trade economy sprung up spontaneously: people traded personal errands like laundry for BPs, and everyone competed to be helpful to their friends.

I’ve tried the bummer point system on several occasions at work and in school, it has works like a charm every time so far. Money is magic, and you don’t need to run a central bank to be a wizard.

13 thoughts on “The Bummer Economy”