I blog whenever I’m excited by an idea, when I just read or though of something cool and I simply can’t keep it to myself. The ideas I’m excited by are new and a little precarious. Often, they’re gratuitously contrarian (*cough* burn the FDA *cough*).

These ideas are bit raw. Not fully baked, but not quite half-baked either. Maybe three quarter baked: arguments that are 75% correct, or models that are 75% complete, or advice that three out of four readers need to hear. I don’t always have the time or the patience to fully bake them on a 3-a-month schedule, but I have a bit of time now to retrospect. To wrap up the year, I’m publishing a series of short posts covering that missing 25% for some of my top articles from year 1. I have about 4-5 planned, and I’ll publish a new one every day or two to celebrate Putanumonit’s birthday week.

Tails of Great Soccer Players is the one that started it all. It did two wonderful things for my blog. It brought in readers who like scientific inquiry and numbers. More importantly, it scared away readers who like political correctness and were mortified by the idea that you can compare nationalities on innate ability, and declare that some people are better than others. Maybe it’s safe for a Jew to write about naitonal difference in athletic ability, ’cause we ain’t got none. Now I’m going to stick my neck out even further and be a man who writes about gender differences, because there’s a really important question we need to answer.

Can Serena Williams beat the man ranked 351st in world in tennis?

Professional tennis coaches talk about variations in wrist tendon strength or topspin RPM between men and women. These are all important topics that I know very little about. All I know are bell curves, you can scroll down in the original post for a refresher of the math.

It’s hard to estimate the number of tennis players in the world, with guesses ranging from 75 million to 1.2 billion. According to a survey, 18 million Americans played tennis in the past year and Americans make up 6% of ranked tennis pros, putting the global number of players at 300 million. Also, 65% of the world’s 13,000 professional players are men. Conservatively, let’s assume that there are 100 million people playing tennis somewhat seriously, 60 million men and 40 million women.

Of these 40 million, Serena Williams is the best. Assuming that tennis skill is normally distributed, she is roughly 5.5 standard deviations better at tennis than the average woman who plays.

In 1998, the Williams sisters bragged that they could defeat any male player outside the top 200. They were promptly beaten 6-1 and 6-2 by 203rd ranked Karsten Braasch after Braasch played a round of golf and had a few beers. Humbled and contrite, the Williams sisters revised their prediction to claim that they’d beat any male player outside the top 350. (Yes, Serena got better since 1998, but she made the 350 claim back then. Also, she is now also past her peak years). The 351st ranked male player should be about 4.4 SDs better at tennis than the average man. His name is Ivan. Since you have no idea what Ivan looks like, I’m going to use a picture of Ivan the Terrible instead. 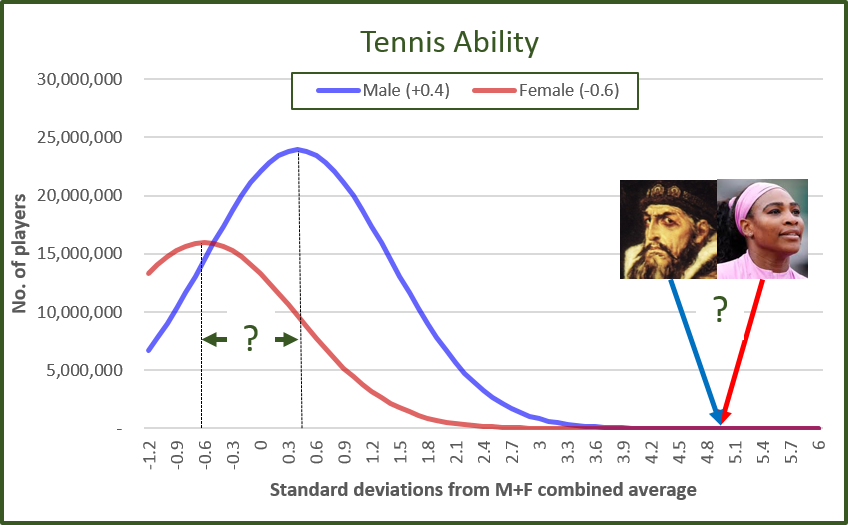 According to the model, Serena can beat Ivan if men are on average less than 1.1 SDs (5.5 – 4.4) better at tennis than women. On the chart above, I made the difference exactly 1 SD for illustration: men are 0.4 SD better than the all-gender average and women are 0.6 SD worse).

A gap of 1.1 SDs means that the median tennis-playing man can beat 6 out 7 randomly selected women at tennis. On the chart, it shows as 6/7 of the area under the red curve being to the left of the dashed line in the blue curve’s median. At first glance, it’s not obvious if this is too high or to low. When I played tennis as a youth I ranked 72nd for boys in Israel. I could beat most girls practicing with me, but got my ass kicked both times I played girls in the national top 10. According to this rough estimate, Serena vs. Ivan would be a close match.

On the other hand, #351 is only 0.12 SD worse than a sober #203. That’s roughly the difference between #10 and #20, and the tenth ranked player doesn’t usually beat the twentieth as easily as 6-1-after-a-couple-of-beers. With that said, the score of a single set is very limited evidence, and comparing comparisons is really stretching this model beyond the point of its usefulness.

Bottom line: I would give Ivan the slightest of edges, but I wouldn’t be shocked if Serena [expletive] takes this [expletive] ball and shoves it down my [expletive] throat.

I couldn't hack it as a mathematician, a magazine writer or a stand up comedian, so now I write a blog with math and jokes. View all posts by Jacob Falkovich