I’ve been traveling for the last month, which marks the longest I’ve been away from Putanumonit. Welcome back!

My blogging setup on the road is a full-size keyboard connected to my phone via an adapter, because this is the age of weird tech. This setup was comfy enough to keep churning out my Predictable Identities sequence on Ribbonfarm, but it’s not conducive to longform work.

This post is a random grab bag of vacation photos, travel observations, and geopolitical opinions. Basically, everything I’d normally tweet about but doesn’t fit in 280 characters. The epistemic status of this post is jetlag.

Speaking of epistemics, there’s an excellent meetup in New York called Great Ideas Conversations, in which smart people usually discuss important books and influential thinkers. In a slip of judgment, this week the organizer invited me to talk about Putanumonit, Bayes, and rationality. I don’t guarantee quality but I guarantee that I’ll be there, so if you’re in Manhattan on Saturday 4/6 please stop by. 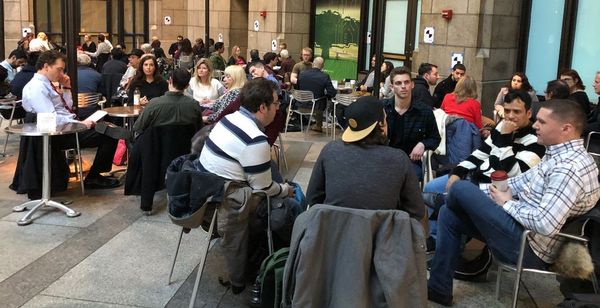 As a reminder, there’s also an NYC rationalist meetup that’s been happening every Tuesday since Robin Hanson had hair. If you’re reading this, it’s for you.

Speaking of fun hangouts, This is Heydar Aliev Internation Airport in Baku, Azerbaijan. It’s beautiful, spacious, comfortable, and inviting. Basically, the exact opposite of every major US airport.

I have two hypotheses on why American airports (New York in particular) suck:

Speaking of airports, I’ve developed a system for air travel that increased the fun time I have on vacations while saving me money. Your airline mileage may vary, but I recommend giving it at least one serious attempt.

Speaking of fancy credit cards: I’m confused as to how they make money off me. The Chase Sapphire Reserve gives me 4.5% cash back on all dining and travel spending while charging retailers only 1-2%. Along with the long list of perks, the value easily adds up to $1,000+ a year even for moderate spenders.

Credit cards charge high interest rates, but fancy cards are only approved for people with stable middle-class incomes and high credit scores. Surely people like that have the sense to set the card to autopay and never incur a cent of interest?

Oh, right, not if they’re Americans.

Last time we were in Israel, my wife commented on how mundanely Israelis dress. Hot weather + informal culture + low power distance =  no suits. On this trip, I made a point of dressing up – I figured that I’ll never be the best-dressed person in New York but in Petakh Tikva I have a shot. Traveling in decent clothes turned out to enhance the experience everywhere I traveled, and I’ll do so in the future.

The picture below may not have been taken in Israel but it captures how it felt to wear a jacket in the Holy Land.

Speaking of places that may not be in Israel, I went hiking in the Israeli Golan Heights a few days before Trump announced that they are, in fact, Israeli. On most maps published in the west the Golan is shown as belonging to Syria. But the map, as they say, is not the territory.

Brief history: on June 6th, 1967 Syria used the Golan Heights as its base for a bombardment and attempted invasion of northern Israel. By June 10th, Israeli forces have captured the area from a collapsing Syrian army that resorted to chaining soldiers to their positions. Six decades later, it’s a pastoral district of nature reserves, vineyards, and Israel’s only mountain.

While the status of the Golan is disputed around the world, it is not disputed in the Golan itself. The vast majority of Israeli voters don’t remember a day when the Golan wasn’t Israeli, and many have grandfathers who defended it from Syrian invasion in 1973. The civil war in Syria likely has put the final nail in the coffin of Israeli willingness to negotiate returning the land; if the Golan was returned to Syria’s president Assad in exchange for peace there is no guarantee that it won’t be soon occupied by a rebel force like ISIS that isn’t bound by the agreement.

Returning the Golan to Syria is outside the Israeli Overton window. Since the UN and EU (let alone the Muslim world) endorse his claim, making peace without the Golan is unacceptable to Assad. This arrangement makes peace between Syria and Israel impossible and preserves the status quo, a status quo that is much nicer for Israel than it is for Syria.

This may sound self-serving, but I think that the world would be better off if we (e.g., the UN) agreed to an expiration date on all territorial claims. After 60 years, for example, we should just agree that whoever holds the territory owns it and get on with our lives. So Syria would give up on the Golan in 2027 if they can’t reconquer it, whoever controls Nagorno-Karabakh will stop getting shit for it in 2051, Crimea-related sanctions would be lifted on Russia in 2074, etc.

The obvious downside is this encourages countries occupying territory by force. However, the actual people initiating the occupation will almost certainly die before the expiration date. Aren’t politicians supposed to be short-sighted?

Most importantly, this is already happening. Almost every piece of land on the planet has been fought over by multiple civilizations over the ages. No one is clamoring for the return of Texas to Mexico, Kiev to Mongolia, or Jerusalem to the Jebusites. Well, almost no one. We may as well just put a number on it and establish an agreed-upon standard.

Israel is not a rich country. Israelis can’t afford middle names, a constitution, or more than one Van Gogh painting. But one Van Gogh is still great.

Van Gogh only produced 900 paintings, but what’s remarkable is that every single one of them is excellent. I dare you to go through his oeuvre and find a sub-par effort. I find this very impressive, and also regretfully conclude that the same will not be said of Putanumonit.